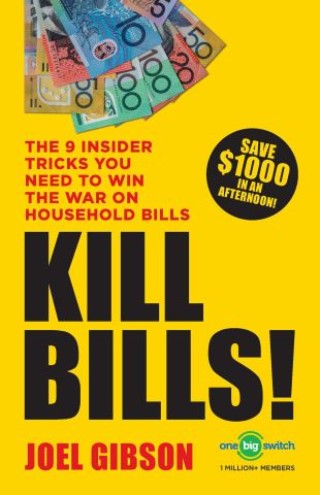 Kill Bills! is the bible for saving thousands of dollars on your major household bills. From power bills to telco, mortgage, insurance, credit cards, petrol and groceries, it describes the 9 Insider Tricks You Need to Win the War on Household Bills.

You'll start saving straight away thanks to simple strategies with names like ‘The De Niro’, ‘The Mystery-Shopper’, ‘The Elizabeth Taylor’ and ‘The Red Dog’. Backed by the team of money-saving experts at One Big Switch, Joel Gibson has gathered 7 years of shortcuts, hacks and loopholes – all so you don’t have to.

Joel Gibson:
Joel Gibson saved over $3000 on his household bills last year with half a dozen phone calls, and now he wants to show others how to do it too. A former reporter and editor at the Sydney Morning Herald, he’s spent the past seven years as the face of Australia’s biggest consumer network, One Big Switch, which has over 1 million members. He’s a sought-after commentator in the Australian media, and possibly the world’s worst surfer.