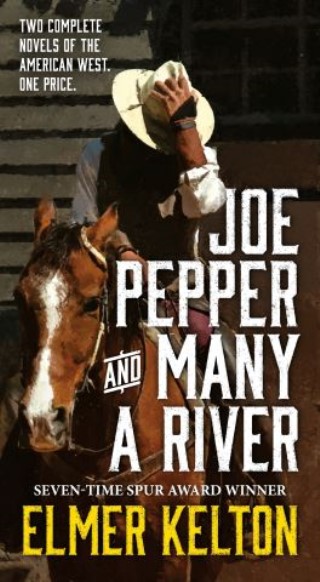 Joe Pepper and Many a River

Joe Pepper and Many a River are two complete novels of the American West at one low price, from legendary western writer Elmer Kelton.

Joe Pepper is a Texas badman with quite a past. In fact, there isn't much that Joe hasn't done in his forty years of living on both sides of the Texas law--except face the hangman.

Now, convicted of murder, Joe is about to get that privilege. But before he goes, Joe has a few things he wants to say--and a few stories that he wants to set straight.

The Barfield family, Arkansas sharecroppers, are heading west with their sons Jeffrey and Todd. In far West Texas their camp is attacked by Comanche raiders and the elder Barfields are killed and scalped. The younger boy, Todd, is taken captive by the Indians. The older son, Jeffrey, manages to hide and is rescued by the militia men. Jeffrey is taken in by a home-steading family, while Todd is sold, for a rifle and gunpowder, to a Comanchero trader named January.

Both become caught up in the turbulence of the Civil War, which even in remote West Texas, the border country with New Mexico, pits Confederate sympathizers against Unionists. The brothers, separated by violence, are destined to be rejoined by violence. Will they meet as friends or deadly enemies?

At the Publisher's request, this title is being sold without Digital Rights Management Software (DRM) applied.

Elmer Kelton: ELMER KELTON (1926-2009) was the seven-time Spur Award-winning author of more than forty novels (including The Good Old Boys, Texas Standoff, and Hard Trail to Follow), and the recipient of the Owen Wister Lifetime Achievement award. In addition to his novels, Kelton worked as an agricultural journalist for forty-two years, and served in the infantry in World War II.