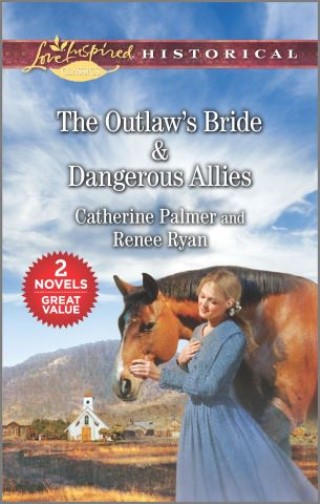 The Outlaw’s Bride by Catherine Palmer

Isobel Matas must recover her dowry from the outlaws who killed her father. But when Isobel witnesses a murder, her own life is threatened. Now Isobel’s only chance for survival is to marry Noah Buchanan, the rugged trail boss who rescued her. As the mismatched newlyweds unite against Lincoln County’s tumultuous violence, they are led on a journey neither ever imagined.

British agent Jack Anderson risks his life working undercover as an SS officer. His latest mission—to uncover intelligence about a secret Nazi weapon—is his most perilous yet. Especially since he’ll have to work with Katarina Kerensky. Jack and Katia join forces to take down the enemy…and learn whether love can survive in a world gone wrong.

Catherine Palmer: Catherine Palmer is a bestselling author and winner of the Christy Award for her outstanding Christian romance. She also received the Career Achievement Award for Inspirational Fiction from RT Book Reviews. Raised in Kenya, she lives in Atlanta with her husband. They have two grown sons. A graduate of Southwest Baptist University, she also holds a master’s degree from Baylor University.

Renee Ryan grew up in a Florida beach town outside Jacksonville, FL.  Armed with a degree in Economics and Religion from Florida State University, she explored various career opportunities, including stints at a Florida theme park and a modeling agency. She currently lives in Savannah, Georgia with her husband and a large, fluffy cat many have mistaken for a small bear.  Renee can be contacted through her website at www.reneeryan.com