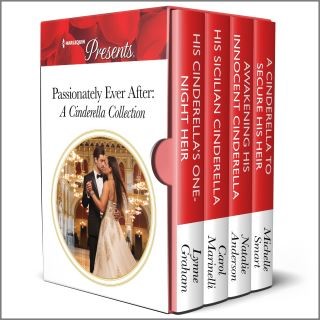 Escape with these irresistible and captivating Cinderella romances! Featuring previously published titles His Cinderella’s One-Night Heir by Lynne Graham, His Sicilian Cinderella by Carol Marinelli, Awakening His Innocent Cinderella by Natalie Anderson and A Cinderella to Secure His Heir by Michelle Smart.

Billionaire Dante’s fake relationship with Belle was only supposed to last two weeks. But one night of seduction in Paris will change the course of their convenient arrangement forever, with the news that Belle is carrying his baby!

Chambermaid Bella has escaped her shameful past, but her memories of that night with Matteo still burn. Forced to attend Sicily’s most exclusive wedding together, Bella knows the dark-hearted tycoon will want a reckoning. As the clock strikes twelve, it’s clear the only way Bella will be leaving the party is with Matteo—via his bed!

Will she resist his scandalous proposition…?

Gracie is mortified when Rafael finds her accidentally trespassing on his estate! She can’t refuse Rafe’s teasing demand that she attend an exclusive party with him. Can she resist the power of his raw sensuality?

A Cinderella to Secure His Heir

She’ll be his wife!

To secure his heir, Alessio will use his incredible chemistry with his nephew’s legal guardian, Beth, and command her to marry him! But will their intensely passionate marriage be enough for this innocent Cinderella?

Lynne Graham: Lynne Graham lives in Northern Ireland and has been a keen romance reader since her teens. Happily married, Lynne has five children. Her eldest is her only natural child. Her other children, who are every bit as dear to her heart, are adopted. The family has a variety of pets, and Lynne loves gardening, cooking, collecting allsorts and is crazy about every aspect of Christmas.Carol Marinelli recently filled in a form asking for her job title. Thrilled to be able to put down her answer, she put writer. Then it asked what Carol did for relaxation and she put down the truth - writing. The third question asked for her hobbies. Well, not wanting to look obsessed she crossed the fingers on her hand and answered swimming but, given that the chlorine in the pool does terrible things to her highlights – I’m sure you can guess the real answer.Michelle Smart is a Publishers Weekly bestselling author with a slight-to-severe coffee addiction. A book worm since birth, Michelle can usually be found hiding behind a paperback, or if it’s an author she really loves, a hardback.Michelle lives in rural Northamptonshire in England with her husband and two young Smarties. When not reading or pretending to do the housework she loves nothing more than creating worlds of her own. Preferably with lots of coffee on tap.www.michelle-smart.com.